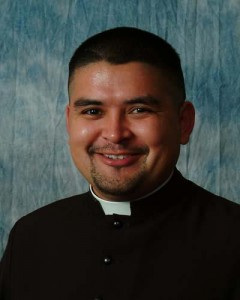 Fr. Sergio was born in Bakersfield, CA, the youngest of eight children. Although his household was culturally Catholic, he only began to take seriously his Catholic faith while doing his undergraduate studies in History and Chicano Studies at California State University, Bakersfield. As he became more involved in catechesis, youth groups, and Catholic adult education, he began to sense the Holy Spirit nudging him to consider a religious and priestly vocation. He graduated from college in 2005 and later that year entered as an aspirant in the Oblates of St. Joseph. He made his perpetual profession in 2011 and was ordained a priest in 2012. He currently resides at Mount St. Joseph in Loomis, CA, and serves as vocation director and youth director for the Holy Spouses Province.