Introduction to the Holy Spouses Ministry

Contemporary Attack on Love and Life through Contraception and Abortion 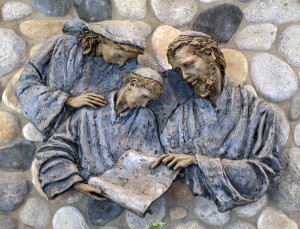 We know in Christ that God is love, a Trinitarian communion, one God in three persons. God is a “living God,” and in his love he shares his life through creation, particularly the creation of humanity. All that exists owes the totality of its being to God alone, who is love and life itself.

From the creation of the human race in his image, God established the natural bond of marriage between man and woman to be a personal and physical union of total openness without shame. The very complementarity of their masculinity and femininity images God, and their unity in love is destined to share in his creative work of giving life. As love and life are one in God, so are they meant to be one in the union of man and woman.

Adam and Eve’s sin, breaking communion with God, causes division and recrimination between the two called to be one. The powerful gift of human sexuality becomes subject to lust. The beautiful vocation to procreate becomes burdened by pain and toil.

Nevertheless, the natural bond of marriage endures “as the one blessing that was not forfeited by original sin or washed away in the flood.” Through the salvation brought in Christ, marriage is not only redeemed and restored, but is elevated to being a sacrament, a sign of the covenant love between Christ and his Church. No one is to separate what God has joined. The sacramental communion between husband and wife is ordered to their mutual benefit and to procreation.

Today as never before in history is humanity attempting to separate love and life. Technical “advances” in methods of contraception have led to a mentality of seeking the pleasure of physical union without the openness to life that was meant to accompany that union. This separation of love from life leads also to a loss of love, since once fertility is excluded from the sexual act, division is introduced into the relationship of man and woman. Self-giving is not total, and therefore is prone to self-satisfaction and selfishness. Neither the Trinity nor the union of Christ and his Church are imaged. The natural plan of creation itself is violated. Pride and lust reign. Divorce rates rise. Adultery is regarded by many as merely a private matter, not incompatible even with the role of national civic leader. It becomes common to consider fornication the norm for youth at the most tender age. Powerful pressure is exerted to treat homosexual relations as normal, healthy and worthy of being granted all the same benefits as marriage.

The separation of love from life further causes a devaluation of all life. Contraception inevitably leads to widespread abortion, and the accompanying denial of the parental instinct, which is often followed by years of repressed guilt, depression, disrupted marital relations, and thoughts of suicide. The disabled and the elderly are the next victims, as acceptance of euthanasia and “assisted suicide” follows the acceptance of abortion. A “culture of death” has been created.

The divorce between love and life comes full circle when not only is procreation eliminated from the act of love, but when also the intimate union of married love is eliminated from the engendering of human life. Artificial insemination interferes with this intimacy by introducing third parties. “Surrogate” parenthood subjects children to legal battles for possession. In vitro fertilization replaces the warmth of the womb, and frozen embryos become simply material to be discarded or perhaps rendered “useful” by having their cells harvested as the embryos are destroyed. Genetic engineering and cloning forebode monstrous manipulations of life without love.

Never before has there been such a need for rediscovering God’s plan for the inseparability of love and life.

St. Joseph’s Unique Suitability as Model and Patron of Love and Life 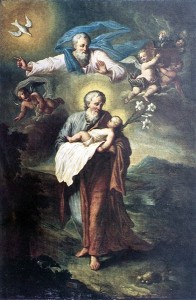 This rather bleak description of the modern attack is countered most effectively by a human model of love and life. In the incarnation of Christ, the Trinity draws humanity anew to communion in love. The Son of God is conceived of the Holy Spirit and not through carnal union. He is conceived nevertheless in the womb of the virgin who is betrothed to Joseph.

The uniquely exceptional marriage of Joseph and Mary is the context of love and life in which the incarnation takes place. The virginal nature of this marriage makes it no less authentic. In fact we may deduce that God chose the most loving of all married couples to serve as parents to his Son. Nor does the lack of physical engendering render this marriage less open to life, since Mary and Joseph together accept and nurture the one who is Life itself.

Saint Joseph’s virginal married love and his paternal acceptance of life not physically engendered by him continue to provide a challenge to the contemporary attempt to separate love and life. His virginity testifies to the inseparability of love and life, since it is occasioned by the incomparable gift of Life in the person of Jesus. This divine offspring conceived by the Holy Spirit infinitely transcends any human offspring engendered in the normal course, thus totally fulfilling marriage’s purpose of openness to life, so that no merely human offspring are to be contemplated and therefore neither are those acts capable of engendering offspring.

Excepting of course the Mother of God, no one more than Joseph is aware that love and life are totally God’s gift. No husband more than he loves his spouse with such total selflessness, seeking not his own pleasure but rather the union of hearts centered in the very love of God. No father more than he realizes the awesome honor and responsibility of being open to God’s plan of accepting life and exercising fatherhood in the image of God the Father. Saint Joseph is uniquely suited to be the model and patron of love and life, so needed by our world today.

Especially since publication of Redemptoris Custos by Pope John Paul II in 1989, the Oblates of St. Joseph of the California Province have undertaken two pastoral responses to counteract the current contraceptive and abortive mentality and their destructive consequences. They are the “Holy Spouses Society” and the ministry and statue of “Saint Joseph, Patron of the Unborn.” 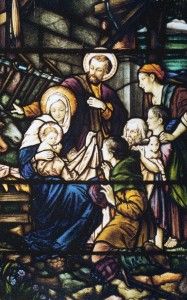 Joseph and Mary were betrothed, meaning that they had celebrated the first of the two stages of Jewish marriage, the legally binding commitment to each other. They were wedded and already called husband and wife, before they lived together. Mary “preserved her deep desire to give herself exclusively to God” in a manner that could be understood only in light of future events. In accepting betrothal to Mary, Joseph was accepting his vocation to love in ways that he could not yet fathom. “God chose Joseph to be Mary’s spouse.” “The fact that Mary was betrothed to Joseph was part of the very plan of God.”

Joseph’s betrothal was an open and free consent to give himself as spouse. It is after the incarnation in Mary’s womb that Joseph’s vocation was made more explicit. The angel of the Lord addressed him as Mary’s husband and confirmed the marriage bond in the light of the divine conception by the Holy Spirit. Joseph “heard once again the truth about his own vocation.” His love as a man was molded and given new birth by the Holy Spirit. He was to proceed with the final phase of the marriage by taking Mary into his home, but he was not to “know her” intimately through sexual relations. His marital self-giving love for Mary was to be expressed virginally, “respecting the fact that she belonged exclusively to God.” This love that was at once marital and virginal represents in an integral way the mystery of Christ and his Church, virgin and spouse. Joseph’s virginal, self-giving love is pure, free of all selfishness. He “showed a readiness of will like Mary’s with regard to what God asked of him through the angel.”

Imaging the Trinity from the beginning, marital love is meant to be fruitful, to be open to procreation, sharing in God’s power to give new life. The unique marriage of Mary and Joseph is not less fruitful because of their virginity. It is the most fruitful of all marriages precisely through their virginal cooperation with God’s plan for the conception of his own Son in Mary’s womb. It is because of Joseph’s marriage to Mary that he is called to be father to this Son in every sense except the biological. Called to be husband to Christ’s mother, he is called to oversee Christ’s birth, to name the child, to guarantee his juridical legitimacy, and to exercise fatherly authority over him as a minister of salvation. Such fruitfulness is without compare and we are all beneficiaries of it. The incarnation occurs in this context so that at the heart of redemption is the purification and sanctification also of marriage and family. 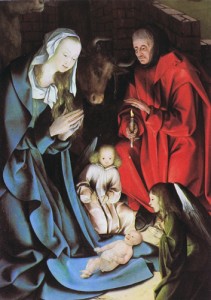 Joseph’s deep marital companionship and communion with Mary allowed him to share in her sublime holiness in a way that deepened his own holiness. The Holy Spirit was the source of their spiritual closeness, the source of a love beyond the limits of any merely human love between man and woman. This holiness was not simply for their sakes. “Whereas Adam and Eve were the source of evil which was unleashed on the world, Joseph and Mary are the summit from which holiness spreads all over the earth…. How much the family of today can learn from this! … It is in the Holy Family … that every Christian family must be reflected.”

These truths are fundamental for today’s couples to rediscover their “mission to guard, reveal and communicate love.” The Oblates of St. Joseph in California are trying to teach these truths pastorally through the Holy Spouses ministry by means of a feast, a rosary devotion, an image, a workshop, and a spiritual society based on a couple’s personal eight-fold commitment. We describe each of these here.

Previous: Parish Apostolate
Up: Apostolates & Ministries
Next: Feast of the Holy Spouses