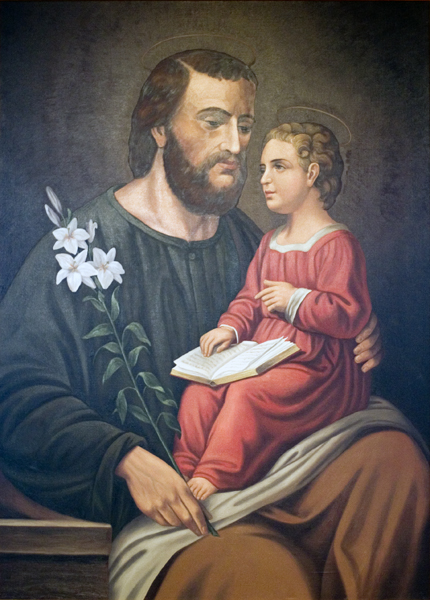 Pope Francis places creative courage as an important feature in a person’s life, which manifests itself more concretely in the face of the difficulties faced in life. This aspect was present in the life of St. Joseph, since his life was permeated with difficulties and challenges. Let us think: Joseph certainly had plans to build a family as every good Jew thought, because children were God’s inheritance, they were like arrows in the hands of a hero, and the man who filled his quiver of children was blessed (Ps 127.3-5). But suddenly God changed all of his plans and put him in trouble by calling him to be the husband of a woman who would have virginally conceived and to be the father of a child who would not be the fruit of his flesh. Then God manifested in his plan that his Son would be born in Bethlehem, and again Joseph was faced with the challenge of going to register in that village in the company of his wife Mary, about to give birth, and being there, unable to find a place in an inn to accommodate Mary, he was challenged to look for a stable where the child could be born in a manger (Lk 2,7). As soon as the child was born, another challenge presented itself, because Herod wanted to kill him, and to defend him he fled to Egypt in the middle of the night (Mt 2: 13-14). Here Joseph and his family embarked on a difficult and risky journey of about 400 kilometres. In Egypt, an unknown place, he encountered different customs and the difficulties of finding work and supporting his family. After two or three years the angel told him to return to his homeland and he left immediately, but knowing the cruelty of Archelaus who reigned in Judea, he went to live in Nazareth (Mt 2,20-23). Even in this situation, Joseph was challenged to address the issue of Jesus’ safety.

In all these circumstances Joseph manifested his creative courage and applied to the resolution of every difficulty, which he faced with determination and above all with great faith. God could have intervened in all these difficult situations, but He did not, and as Pope Francis says, we would be led to ask ourselves why He did not, and so the Pope himself replied: “God intervenes through events and people”.

God willed to have need of the creative courage, determination and faith of St. Joseph to carry out his plan of salvation. In these circumstances he was the instrument that God used. Of course, for the realization of this plan, a man of the stature of St. Joseph was needed, just as a person of the stature of Mary was needed to make possible the presence of his Son in the world as Saviour. Joseph “is the man through whom God deals with the beginnings of redemption; he is the true “miracle” with which God saves the Child and his mother. Heaven intervenes, trusting in the creative courage of this man…”. It is gratifying to know that “God has entrusted the beginnings of our Redemption to the custody of Saint Joseph”, as the Redemptoris Custos teaches us. This means that God chose someone who had the greatest ability to carry out this unique extraordinary mission.

St. Joseph is presented to us as a man of courage and courage is nothing more than the action that comes from his heart and is linked to his trust in God, which led him to let himself be carried away by God’s plans and to discover love more and more perceptible around these planes and to let oneself be instructed by them. Meditating on the challenging facts present in the life of St. Joseph, we realize that it is not the powerful of this world who are victorious, because God allows his plans to be realized even through simple people and, in the eyes of the world, as insignificant as Joseph, which is an example for us to overcome the challenges of life, as long as we know how to use “the same creative courage of the carpenter of Nazareth, who knew how to transform a problem into an opportunity, always placing his trust in Providence”.

The situations experienced by Joseph were dramatic and led anyone to feel discouraged and to abandon everything; situations that in common parlance would make us say that God had forgotten him, had abandoned him, but on the contrary it was not so because he had the light of the Word of God that enlightened him and urged him to continue precisely because he had trust in him and because he possessed a creative courage. Pope Francis in Patris Corde compares creative courage to the determination of the four friends of the paralytic who, in order to bring him into the presence of Jesus, and not finding a way because of the crowd, “opened the roof at the height of the place where he lay and, made a hole, they lowered the bed on which the paralytic was lying” (Mk 2: 3-4). The difficulties did not discourage those four men, and Jesus saw in this gesture of the friends of the paralytic their creative faith, and the miracle took place.

The creative faith of St. Joseph allowed him to overcome obstacles and to effectively establish himself as “Keeper of the Redeemer”. Faith is about creativity, and that is what has happened around the world with the Church during the period we have been through and are still going through with the Covid 19 pandemic, where faith and creativity have become essential for people. The creative courage of the Church has opened many paths; the previously limited means of communication became a great tool for cultivating faith and spirituality and made it easier for families to live the spirit of the domestic Church. Creative courage has helped many Christians to multiply moments of personal prayer, reflection on the Word, prayer of the rosary and even video calls to share experiences of life and faith with more people. Even in our Congregation and certainly in our Provinces / Delegations, creative courage was not lacking since the activities did not stop, as numerous meetings, live and even programs on television channels helped to get out of the isolation that the pandemic has imposed on everyone. The schools did not stop their activities and, even though the doors were closed, the students continued to study. The teachers developed the program of the year by dedicating themselves to the means to teach in their homes. All this shows us the value of creative courage, so well imprinted in the life and attitudes of St. Joseph. We have a patron for the Church and for our Congregation, who must make us proud and stimulate us to know him more and to imitate his edifying examples, since, as Francis affirms, together with him “Jesus and Mary, his mother, are the most precious treasure of our faith “.

St. Joseph faced the concrete problems of his family exactly as the other families of the world do, that is, with creativity, with faith in God and with the strength of his work. His creativity was courageous, as it is up to us to be courageous in these times when God gives us the opportunity to live our Oblate family life, knowing each other, supporting us, collaborating, loving each other, dreaming together that our future will be better. Now it’s up to us to be more courageous and creative, it’s up to us to accompany our confreres who need support with determination, just as Jesus and Mary needed the support of St. Joseph. Now is the time to support the most vulnerable families in our society, especially young people intoxicated by the demands of the world. Now is the time that with creative courage we go out to meet our brothers and sisters thrown into the suburbs, forgotten by the consumer society. We must have the creative courage and dream like St. Joseph, to invent, search, find different and better times for our world, our Church and our Congregation.

Jesus needed Joseph to be protected, cared for, nourished and educated, just as Mary, his wife, needed to be accompanied by his creative courage; this is the reason why St. Joseph is the protector of our Church. This role of his in the Church will help her fulfill Pope Francis’ request by speaking to the Filipino bishops in 2019: to be a Church with “more creative expressions” in the pastoral ministry, so that the Church can be “a house with open doors, offering hope and strength to those who suffer and to all those who seek a more human and dignified life”. He will help the Church in the transmission of the faith, to be much more creative in this world that has become a kind of global village with new forms of exclusion, new forms of poverty, with new challenges for the transmission of the faith in this liquid society in which families and the Church itself are losing consistency and the challenge of transmitting the faith is posed above all to the new generations.

We need the creative courage that St. Joseph teaches us; we need to seek the reinterpretation of our religious values ​​and new fraternal life, because, to use the expression of Rolo May: “We have experienced the death of an era and the new era is not yet born”, just look at the radical change in sexual mores, in education, in the Church and, consequently, also in our Oblate life. We need this courage to preserve our values, to give us the support of our values ​​as consecrated persons, since without this courage that St. Joseph teaches us, our fidelity to consecration and to the Congregation can only become conformity. 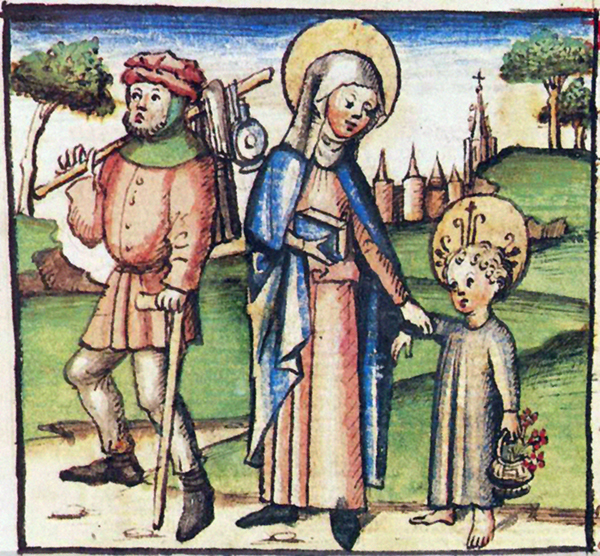 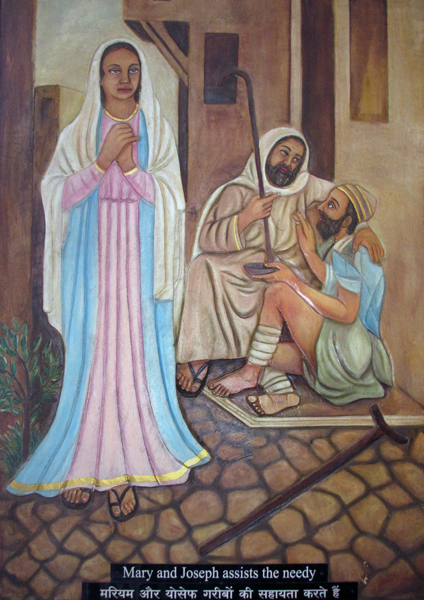 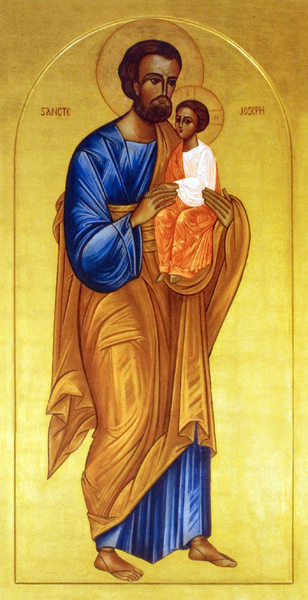