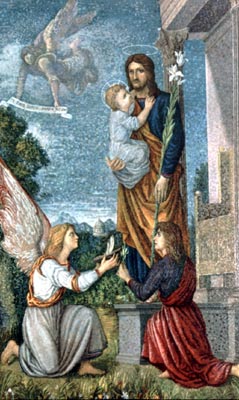 On March 19, 1961, in his apostolic epistle, Le Voci, naming St. Joseph patron of the second Vatican Council, Pope John XXIII also called for the St. Joseph altar in St. Peter’s Basilica in Rome to “take on a new and fuller and more solemn splendor….” On March 19, 1963, the Holy Father blessed the new mosaic, pictured here. Following the blessing, he commented: “Upon entering the basilica today We dedicated the new image of St. Joseph over the Saint’s altar. We were urged to perform this ceremony Ourself as an act of piety towards the most chaste Spouse of Mary and the Guardian of Jesus, in order to fulfill Our most earnest wish to promote within this great temple of Christendom devotion to St. Joseph, protector of the Holy Church and patron of the Second Vatican Council. ”
The mosaic, over nine feet high and made of individual tiles all less then half an inch square, reproduces a painting of the Milanese artist, Achille Funi (born c. 1892). St. Joseph stands on a classical marble pedestal, with Jesus in arm and flowering staff in his left hand. The Child affectionately holds and looks toward his earthly father. At St. Joseph’s feet an angel kneels offering him St. Peter’s boat with supplicant expression. A human person also kneels offering him an olive branch with a plea for true peace. Another angel flies down from heaven with a banner that reads Tu eris super domum meam, “You shall be over my house.” In a word, St. Joseph’s image in the mother church of all Christendom recalls his role as protector of the entire Church. St. Joseph hears the prayers of all who invoke him, whether in the humblest little chapel or the world’s greatest basilica.

Patron of the Universal Church