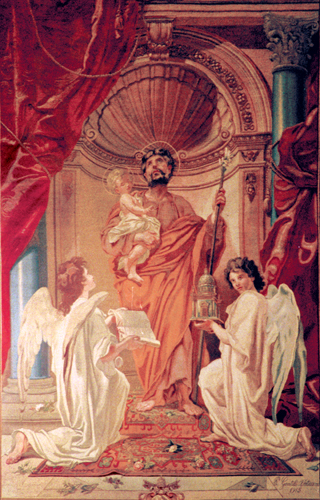 ,On December 8, 1870, Pope Pius IX issued the decree Quemadmodum Deus naming St. Joseph Patron of the Universal Church. The same pope ordered a large tapestry of this event to be made for St. Peter’s basilica. The grandiose work, begun by Francesco Grandi and Pietro Gentili, was not finished until 1915 by Aristide Capanna and Silvio Grossi. By then it was no longer possible to hang the tapestry in St. Peter’s, since mosaic had become the dominant form of artistic expression there.

,The tapestry portrays St. Joseph holding the Child Jesus. Two angels kneel before him, one holding the above-mentioned decree on St. Joseph’s patronage and the other holding the Vatican Basilica, representative of the entire Church. The beautiful work, however, was left warehoused in the Vatican for over 60 years, until Oblate Father, Tarcisio Stramare, had occasion to humbly suggest to Pope Paul VI that it be consigned to St. Joseph Aurelio parish in Rome. The Holy Father graciously granted the request in 1978, which coincided with the centenary of the death of Pius IX, as well as the centenary of St. Joseph Marello’s founding of the Oblates of St. Joseph, to whom the parish was entrusted.
,Pope John Paul II subsequently visited the parish within less than a year. These events are memorialized in the parish by a stone plaque containing the reproduction of a bronze medal of the patronage, coined by Pius IX, and the inscription: “In honor of St. Joseph/ Patron of the Universal Church/ Pius IX/ desired this great tapestry/ Paul VI/ consigned it to this church/ visited by John Paul II/ during the first Centenary year/ of the Oblates of St. Joseph/ March 18, 1979”.
,In 1986, for the 25th anniversary of the founding of the parish, the display of the tapestry there was given new prominence by placing it on the central angled wall as if it were one page of a book, opposite a facing page formed by a newly created ceramic bas-relief. The ceramic bears the artistic inscription Ite ad Ioseph, “Go to Joseph,” pharaoh’s words referring to the Old Testament patriarch governing Egypt’s grain bins. The words apply even more fittingly to St. Joseph, the patron of the Church, who offers the world Jesus, the Bread of Life.

Patron of the Universal Church