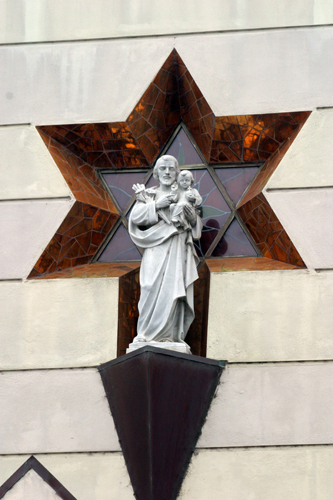 The architectural Star of David was designed and executed in gold-leafed glass tiles as a prominent symbol behind the marble statue of St. Joseph and Child on the facade of the Shrine of St. Joseph, Guardian of the Redeemer. The Star is symbolic of Jesus’ connection through Joseph to the House of David. This connection fulfills the Old Testament prophecy that the Messiah would be a descendent from the line of David (e.g. 2 Samuel 7:8-16).
,The star is an important symbol in the Christian Bible. In both Old Testament Hebrew and New Testament Greek, as in modern English, the word “star” applies to a physical star in the sky, as well as a figurative reference to a special shining person. Numbers 24:17 refers to a star coming forth from Jacob, which in light of the New Testament we know to be Christ, who is a descendant of Jacob through David. In Genesis 37:9 the Old Testament Joseph, a prefiguration of St. Joseph, dreams of eleven stars bowing down to him. Matthew 2:1-12 is about the star of Bethlehem, the City of David, that appears and guides the wise men at Jesus’ birth. Apocalypse 22:16 reads: “I Jesus … am the root and the offspring of David, the bright morning star.”
,Jesus is known as the Son of David, and his Davidic descendence is an importance element for his recognition as the Messiah promised of old. Joseph’s role is that of guaranteeing that Jesus be enrolled and have legal (although not biological) descendence in the line of David. The angel’s first words to Joseph in Matthew 1:20 are “Joseph, son of David.”