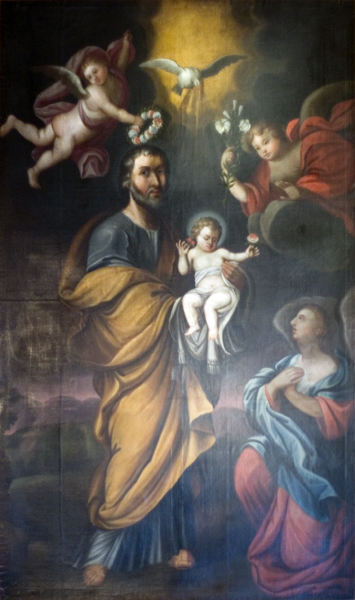 Sibreque (1612-1682) became Brother Luca di San Carlo, a discalced Carmelite at Santa Maria della Scala in Rome. From his Trastevere workshop he traveled to provide art for various Carmelite monasteries. It had become common in the New World to show images of St. Joseph alone with the Child, and probably Spanish and Dutch missionaries brought this concept back to Europe. At this time images of St. Joseph with a royal crown were also frequent. In this image an uncrowned Mary at the right has a humble posture of reverence for the Child and for Joseph’s royal role in the line of King David. It is of glossy oil on canvas 281.5 x 170 cm.
In 1669 the Confraternity of St. Joseph was established in Cracow and on March 18 of that year the image was carried from the Church of Our Lady to the Carmelite monastery of Saints Michael and Joseph. When the plague threatened Cracow in 1678, the faithful entrusted themselves to St. Joseph, and then offered plaques of thanksgiving for being spared through his intercession. The Confraternity flourished and in the seventeenth and eighteenth centuries published some nineteen St. Joseph prayer manuals.
In 1714 members of the Cracow City Council and representatives of the city guilds unanimously elected St. Joseph as patron of the city. Pope Clement XI approved a decree to this effect on March 23, 1715. On May 11 of that year the decree was made public and the image was carried in procession. The same day Jan Antoni Slowkowicz, a city councilor who was also a doctor, was miraculously healed. Many copies of the image were made, and it became widely renowned throughout Poland.
Poland suffered various invasions in the eighteenth century and in 1797 the anti-Christian Austrian government turned the monastery into a prison. The monks who were expelled carried the image to another Carmelite monastery, where it remained hidden for 135 years. When the Carmelites renewed their monastery in 1932 the image was placed in their cloistered area. Eventually the origin and history of the image was rediscovered and verified, and on December 4, 1979 the monastery chapter unanimously decided to return it to public veneration. On May 1, 1980, Feast of St. Joseph the Worker, the restored image was enthroned at the remodeled side altar of the Church of the Discalced Carmelites. The Polish province of the Carmelites was entrusted to St. Joseph’s intercession. The newly re-discovered patron of Cracow is again ready to offer his protection and aid.